Saddlebreds are kind of like mopeds...No, wait. I think I have this joke all wrong

I must admit, I have been holding out on you.  Because the very first horse I looked at ended up being one of my front runners, three months and three visits later (the seller no doubt thought I was the tire kicker extraordinaire).

Late in August, just as I was sending the Platypus off to be sold, I saw the advertisement for this horse.


Who knows why, but her picture caught my eye.  I thought she seemed lean and athletic, and I liked her hind end - it looked like she would have a hell of a motor.  I was sick of looking at pictures of overfed meatball two year olds with little wimpy stifles and big round asses.  I also kind of liked the look on her face, which I know should not count for anything, but hey, I am only human.

The other thing I did like about her was that her sire was Viva Voltaire, one of the young hot stallions at Charlot Farms - she was from his first crop of foals who were all just rising 3, so who knew if they had any talent...pfft, minor detail.  Viva Voltaire was himself a lame jumper, not a dressage horse in any way, shape or form...errrr... again, minor detail, as long as the bloodlines were in there somewhere.  Right?

WTF...Yes, for shit's sake, I am on about Charlot Farms AGAIN.  I am not too proud to admit, I had a Charlot Farms complex.  I was convinced if only I could afford a horse from Charlot Farms, the birds would sing, heavens would shine down upon me, and I would passage on off to dressage Nirvana.

Well - if I could not afford a REAL Charlot Farms horse - at least I could afford one of their offspring.  NO, she was not a wonderful, all talented Rio Grande baby like El Muddo, but what the hell, still close enough.

There was of course something I really didn't like about her.  The fact that she was part Saddlebred.

I could rationalize away Arab, had a childhood lust for Morgans - but..the Saddlebred thing was hard to swallow.

Why?  Well, there were several factors.

First, I had never met a Saddlebred in real life, so I really had no frame of reference.  I had only seen pictures.  Pictures that looked like this: 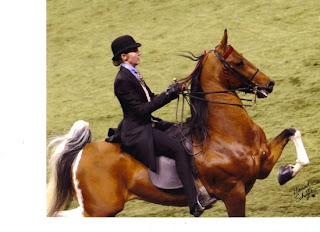 Now don't get me wrong, I am not knocking this horse and rider at all. Maybe if you are a Saddlebred person this is a total mouthwateringly georgeous picture, but as someone who knows nothing of the sport - what is good / bad / freaky - it just looks weird.  It also does not look anything like what I envisioned my dressage horse resembling.

Next - Saddlebreds undoubtedly have a reputation as being - uhh - nuts.  I know people think Arabs are nuts too, but I had dealt with Arabs all my life, so I had a pretty good idea of what variety of nut I would be dealing with in an Arab, whereas I had no clue exactly what awaited me in the mind of a Saddlbred.  Brazil - or filbert?  Tree, or ground nut?  Who knew.

But I would say the biggest turnoff with respect to Saddlebreds had to be that the Saddlebred sporthorse industry unfortunately has some total hard-core freaks representing their numbers on the bulletin boards - the thought of being associated with this group in any way was frightening to me. Remember that at this time, I was still regularly visiting COTH and UDBB.  There was a particular poster there who made me want to vomit every time I read her self promoting, bullshit posts on her stupid stallion - who happened to be a "horse of colour" as well.  Coincidence?  I think not.

(You may wonder why I kept reading her posts.  Good question.  They had that irresistible train wreck quality about them that keeps you coming back for more).

I would like to be able to say that the Saddlebred spothorse movement has come a long way since then, but unfortunately, I don't think it has.  One Harry Callahan versus a few very vocal jackasses that keep promoting whacked out bullshit (like thinking that Totilas is actually Kenyan, not American... (no, no, wait, I am confused again) - is actually a Saddlebred descendant, as are all KWPN horses...) make it a really big uphill climb to reach the realm of sanity and well accepted sporthorses.

(And yes, this same nutbar woman still appears to be highly active on UDBB, although lucky for the Saddlebred people, she seems to have new genetics to flog).

So, when faced with a Saddlebred prospect, just like the old joke says - I thought they might be fun to ride, but I wouldn't want my friends to see me on one.

But...I happened to be visiting a friend in the London area, so I figured I would stop by to see her.  What the hell.

Oh - just to be clear - that would be London, Ontario.  Just down the road from Paris, Ontario. I was driving in from the town formerly know as Berlin, Ontario - but now called Kitchener, due to that nasty "we hate Germans" sentiment that cropped after the war.  We aren't very original in these here parts when it comes to naming our towns.