I want to die peacefully in my sleep like my Grandpa (not screaming like the passengers in his car).

Actually, I forgot - one other transition has occurred. The one that actually brings to mind the horse world in some ways.

I bought a new car. I call it - Raging Bull (bonus points to the first reader who knows why.. yes it is red.. annnndd...). 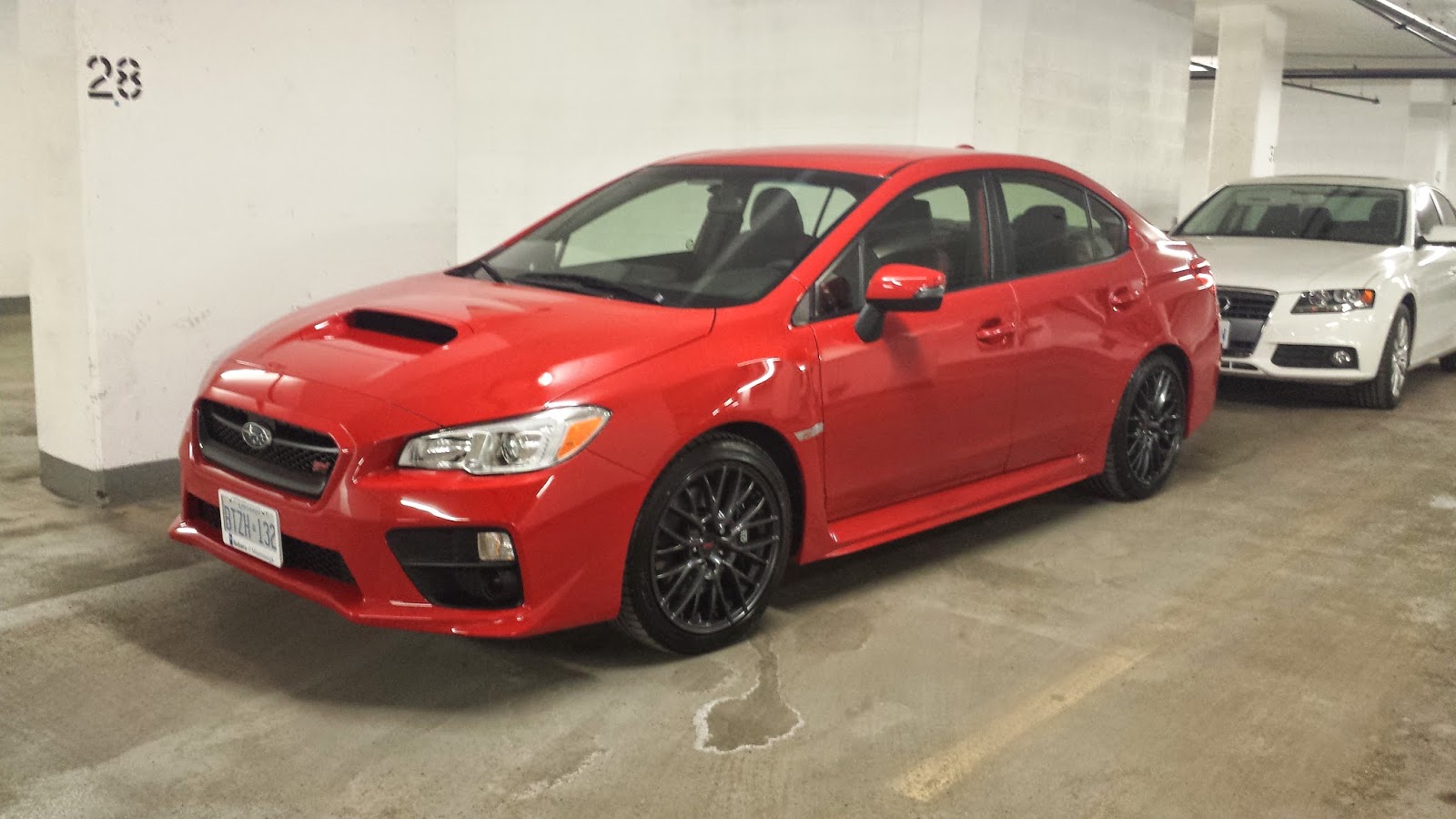 I have learned a few things since this transition.

First - I have been informed several times since my purchase that Subarus are the automobile of choice for lesbians. And secondly, WRX STI's are the hot rides of many a 21 year old man/boy's dreams. As a result, I have left those around me wondering if I am switching teams, or gearing up to become an Uber-Cougar.

I will leave you guessing as well. There is of course a third option, that I just needed to buy a four door car for my job and decided that I wanted something a little more wild and crazy than the standard issue midlife SUV that my fellow women co-workers seem to be drawn to. But that option is much duller than the first two, isn't it.

The next thing I have learned is if you are a 40+ year old woman who suddenly on a whim decides to buy a 300+ horsepower car to toodle around the 'burbs... the same model that has just broken the Isle of Man TT race record for cars, driving an average speed of almost 120 miles an hour through crazy twisting turning roads and small villages, you hear a familiar narrative. You might recognize it from such places as, oh, your local dressage barn filled with catty middle aged women.

To my face, it is fine. "Oh nice car, I love the colour".  But I know what people are saying behind my back. If I had to keep my car at a car boarding stable, instead of in the underground parking garage... the chatter would go like this.

"I can't believe she bought that car. That poor, poor car.

It will never reach its potential NOW! Even if she takes it to a track day, that car could go PSG and she will barely be able to putter around at first level with her driving skills.

Sure she can drive standard, but in a fake, false, spank-n-crank type of way. I bet she can't double clutch her way out of a paper bag when the time comes to really ask for the performance that car is capable of. She needs to drive Raging Bull FORWARD!  Not be riding the brakes into turns. Let it go!  Let go of it's face! (No, no, she shouldn't actually let go of the the steering wheel. I am speaking metaphorically here)"


Even the guy at the dealership asked me if I really needed the STI, when I was unlikely to even push the base model WRX anywhere remotely near its performance limits. You know things are bad when a car salesman tries to talk you out of spending money.

So - yes. I know. I have officially become the automotive world's equivalent of a horse petter. The woman who buys the imported warmblood schoolmaster, and hopes someday to show Grand Prix. Or at very least, canter while not attached to the longe line.

Which I don't think is fair, really. Had I bought a 1992 AstroVan no one would have expected me to fill it with children and go to soccer games. Come to think of it - when you buy a $500 Quarter horse at the auction, no one scoffs and asks when you plan to herd cattle on the plains of Alberta. You are allowed to aim as low as you want without stirring up any eye-rolling. Just don't put on a show that implies you may someday achieve pretentious things that are far beyond any limits of reality.

But it has left me thinking a bit about the similarities between learning to drive a performance car, and learning to ride a performance horse as well.  For example, if the gold standard of a beautiful hunter round is to ride a horse that makes it look like you are doing nothing while the horse floats you effortlessly over the jumps, then I guess the car equivalent you would buy would be a big BMW M series sedan or something similar that is admired by your grandfather.

However, if you want to make it around the Isle of Man without T-boning a quaint stone wall and dying, it is all about lightning fast acceleration and deceleration and overall handling when things get hairy. In other words - it is really about the transitions.

I have no idea what became of my test book during my move (probably collecting dust at Value Village with the truckload of other possessions I could not be bothered to cart along with me), but as I recall from scribing, the most often repeated whisper to the judge during a day of sweating your crotch off in long pants is "uhhh...mark for transitions?".

Judges often forget that they not only have to come up with a score and something pithy to say about the fact that the rider's extended canter looks exactly like their collected canter, and both closely resemble whatever plain old canter the horse in question is likely to offer up given his choice of gaits... but also must elaborate on the non-existent differences as the rider makes some sort of a show out of transitioning from one of these states to the other.

Transitions are big. And this is reflected in our dressage tests. Adding a separate line to score transitions enables the judge to ding you not only for doing things poorly one at a time, but also for the fact that you can't even string together your clusterfuck of errors with any amount of admirable chutzpah.

And, one thing that was becoming evident to me as I toiled away trying to move the dial on Ms. V's progress from training level to - uh - something beyond training level - was that although having a "sensitive", "hot off the leg", "responsive" horse is a lot more pleasant a lot of the time than having something that requires more effort to get rolling - doing a smooth transition with such an animal is a lot more difficult than doing them on a horse that breathes a little less fire.

You know all of that stuff about "timing of the aids" and "leg before hand" and "ride every stride"... well sure, you need to do all of that while you are cruising around every time you ride, in every gait, blah, blah, blah. However - the time that the fact you are no Anky really shines through the brightest (or am I supposed to say Charlotte these days?) is when your hot horse either flops on her face during a downward transition with not enough leg, or nearly bursts out of her skin during and upwards one with too much leg - or actually does both during one transition, as you try in vain to patch things up mid-way into your bumbling effort. There is just so little room for error.

There is a reason big, slow, lumbering old school warmbloods still have their huge fan base. They are just so comfy and easy to ride, and if you are not doing anything requiring split second reactions, they are really your best bet. Also, if you are showing any dressage level where the transitions can be "through walk", or even a level where they can't - but a step of something weird and tense looking is likely to be punished more harshly than an also incorrect lingering semi-comatose transition (and let me tell you - it almost always is) well, old Eis-Eis-Kindskopf the 25 year old Hanoverian is probably your best bet here too if you are dreaming of a brag worthy score.

Yes, yes, of course - you will be the one laughing when the time comes to teach your fire breathing dragon horse to piaffe or passage or do anything else requiring more go than woah. I know this, you are totally correct. Just keep telling yourself that as you read the comments on your first level tests through the tears.

Bottom line - transitions can really be a bitch on a hot horse.

As is the case with cars.

Ask yourself - when is the last time you saw grandpa stall his Oldsmobile at a stoplight, then be angrily honked at by 5 impatient drivers before he is able to get the sucker fired up again and herky-jerkily drive away, chirping his tires on the pavement as he pops the clutch and gives himself whiplash?

The answer is ..never. Ever.

Now ask yourself - when is the last time you saw Curmudgeon doing all of that while driving to the office in Raging Bull. If you happen to live in the GTA, the answer might be Wednesday.