What is the difference between being "stuck".. and not moving on purpose?

Good morning to all, or afternoon, or whatever time of day it is you have decided to blow here on the Curmudgeon Blog.  In the spirit of an annoying co-worker who always feels the need to say some self important bullshit at the beginning of every snooze-inducing meeting, I would like to begin today with some "housekeeping issues".

First - I see we have a lot of new members to the party which is great, welcome one and all. However - if you made it here by way of my bitchy Forrest Gump post, I would like to recommend that you stop reading now, and start at the beginning - because you may or may not have figured out that this is a Chronicle of the Horse described below. Like - seriously - a real chronicle. Not some website of strung together news stories and bulletin posts, but an ongoing history of Ms. V. So you should really go back and start from the start, as we are already about three years into the story.

The beginning of the story

Secondly - I will mention that if you do follow along, at some point in the heap of posts, there is actual video footage of me riding Ms. V. So, if you are one who enjoys a good spoiler, dive in and find it.

Lastly - for those of you who have been following along, I would like to share a picture of an absolutely adorable little hunter pony I found on Facebook. Is he a cutie or what? Maybe when I get back into riding I will buy one of these.  Looks like more fun than dressage, doesn't it. 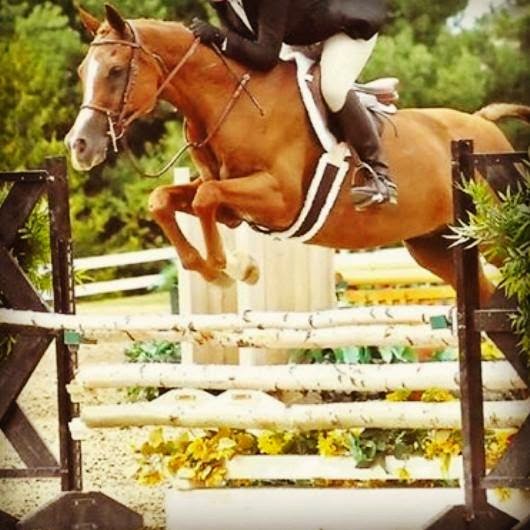 Or as some might like to call it - the early days of being stuck at first level.

Curmudgeon! You just decided to step back and concentrate on your show season, then resume your journey towards collection in the fall.  I hardly call that being "stuck". You made a reasonable choice.

Yah, sure, I agree with you to some point. However, the passage of time just sort of sneaks up on you slowly. And as many of you who are stuck at first level can probably attest to - then one day you find ten years have got behind you. No one told you when to run. You missed the starting gun.

Really, the fact that we were hitting a wall at this point in time should have been a huge red flag. I should have left the jacket in the dry cleaner's bag and figured out what the hell was going wrong. But I didn't.  Hey, I wanted to get out there and show! That is what all of the cool kids were doing.

Well, not all of the cool kids. The actual pro riders who were training their horses with FEI levels on the brain weren't out slogging around at first level.  They were at home. Working through these problems and solving them. They were not putting on the brakes and patching up any hurt feelings or misunderstandings on the horse's part well enough to do a respectable leg yield and a lengthen trot. With the exception being those who had the goal of getting a client owned horse in the ring and finely tuned so that said owner could then ride first level forever ad nauseam, in a safe and sane fashion.


(Note that this is not the same population as the other people who were not showing - those who felt that the horse gets to dictate progress on their own schedule. Since any sort of transition or "up the levels" related activity has the potential to stir up moments of "loss of harmony" with their equine partner, for this group, progress must often be slowed to a halt. Trail rides ensue. Followed by pithy bulletin board posts.  But I think I covered them in my last entry, so I will skip that for today).

But what is the problem with a little showing? It is a great idea to get out there and get the opinion of others.

I totally agree, 100%. We should all show. Nothing is more irritating that someone who goes on about how they have mastered level (insert level here) without ever having taken it on the road and proving it.

However, the problem with first and training (as I have gone on about before, so please excuse me for the repetition) is that the things that are rewarded are important, but not necessarily reflective of where you are headed on the journey in the big picture of things.

And so by shelving my efforts to introduce the little bits of collection required for the canter-walk transition, and instead showing and working with the feedback I received - I essentially spent another 6 months rewarding Ms. V for tuning me out the minute she understood the mission at hand and enthusiastically tooling around doing the things she naturally did well. (What? you want a  big forward canter - no problem!... You say rumour has it judge likes "Energetic" trot - yes! 7 coming your way. I got it Curmudgeon, sit back and enjoy!)

Now I don't think this attitude was all wrong or bad. Her general mindset was correct for eventually being able to be "in self carriage"and far preferable to a horse that was on auto-pilot just because they don't give a flying fuck about anything the rider has to say at all (and there are lots of these out there). Her translation of the phrase "self carriage" at this point in time was just a little to literal, She wanted to just carry me off at the slightest of aids to wherever she felt we needed to go at the time.

Overall, this lead to scores that ran very hot and cold - as in, they tended to be mid to high 50's or low 60's, composed of 6 and 7's rewarding these energetic, forward gaits, with dings here and there for moments of tension - usually during the "easy" things, like walk transitions. We could do everything well at any given time - but generally speaking, not all in one test. And the judges comments usually reflected this - lots of talk of "potential" and "elegance" and "athletic" and other positive indicators of good things coming our way on the horizon once Ms. V did a little maturing in the mental department, and I did a little improving in the "wear the pants and actually ride your horse" department.

The troubling part was that these decent scores with variation within the test were intermingled with total meltdown low 50's for the tests where I decided to exert a little more influence on things, only to have Ms. V say "woah..woah..woah..what the hell was that? I though we covered this during those stupid canter-walks - things go better when we do things MY way, Curmudgeon..stop with the interfering. Did we not just get a 7 on my most awesome forward canter?  The judge and I know our shit, lady".

You see, I think the most unfortunate part of our fail and retreat on the "up the levels" front was that it introduced some lost debates into our riding equation. Whereas up to that point in time, the Coach and I had pretty much been able to finesse compliance out of Ms. V all along the way, after this attempt at greater things, we had given her a glimpse into the world of NO. Which is never a good thing with horses. As we all know if you lose too many debates, the horse is bound to figure out you are a little soft 130 lb. blob trying to rule the life of a big meaty horse and eventually has a Sandra Dee moment of her own.

The real key to "riding in harmony" isn't to never ask. It is to be able to ask in a way that your horse never sees this world of NO, and thus your request is never rejected. Simple, right? (ha, ha, ha....haa..)

Also unfortunate was that the prescribed cure for this inconsistency by most of my circle of friends and advisers was - more shows. And more riding at the shows. Because, as the theory goes, the more a horse gets out and about, the less things like flags or port-a-potty doors flying open, or other horses freaking out in the warm up will cause them to flip out. And - when you go to more shows, enter more classes. Every test of choice, every class - warm up early in the morning, mid-afternoon, and again, right before you ride... show show show... ride ride ride...spend spend spend...

So not only did I shelve progress and show - but I drilled the hell out of first level.

And our scores did not get better. In some instances they got worse. It was like some agonizing form of expensive self torture. What was that "perfect practice" saying again?  Well whatever it is, we were not doing it. So I guess it really doesn't matter, does it.

Should I have showed training level again? (I will ask the question on your behalf since I know at least one of you is thinking it). I truly don't think this would have made a difference, since there wasn't any component of the first level test that was particularly difficult for Ms. V - it was the act of stringing movements together while still paying attention to my aids that was the issue. In fact, the more boring training level test might actually have made this problem worse, since there was less to do.


I was seriously so pumped to show that summer, and so convinced that we would be superstars. It was extraordinarily disappointing. I really tried to stay positive, but to be honest, I think I did cry a little at every show. As I recall I skipped the last Gold show, wrapped the year up with a halfway decent Trillium performance where we managed to score over 60 both tests - then packed it in for the year.

I had a whole winter ahead of me to get back on track. To start back at my "one level per year" progress, and master that fucking canter-walk transition. We would be superstars, uhh, next year. At second level.

Get back at it, Curmudgeon, I told myself. FEI is just around some corner. Somewhere. I think. Maybe.