And so, videotapes in hand (remember those?), I headed off to get a second and third opinion, on my first, second, third.. etc. horses - and ultimately, with any luck, to make a decision I could live with.

Realistically, my other option was to pack it in for the season, and start shopping again in a few months.  I was already struggling with less than perfect conditions - as we headed into winter, the horses were only going to get furrier and muddier, the footing lumpier, and the experience all around less appealing than it was.

If that was possible.

The other issue was that word on the street is that people with nicer horses give up on selling for the winter, send the horses out for 60 days training, and try again to sell in the spring as started 3 year olds with price tags to match.  So, my window of finding a bargain - and being able to identify it as such, under a crust of snow and filth - was closing fast.

Although my pregnant friend has not been able to join me on many shopping missions, she was coaching me from the sidelines.  Based on the information I had provided to her, she had thought Don Donutico sounded like a good bet as well.  She was familiar with the stallion, and had heard decent things about him.  That said, she also thought there was some potential in the Viva offspring based on the limited information available on him.

And best of all - having been involved in equine genetics for many years - she had an exceptional understanding of one of the most fundemental principles of horse breeding, one that I think can be difficult for someone less experienced such as myself to grasp.

You can have the world's best sounding horse on paper, and still wind up with a dog in the barn.  And vice versa.

So, we watched the videos, discussed, and decided. 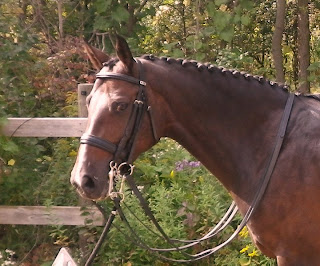