Aren't you going to put shipping boots on your horse...? Why no. Thanks for asking.

And so, with our showing debut behind us, we hunkered on down for a long Canadian winter of circles and transitions, and all of the other exciting things that one does with a 4 year old horse.

You see Curmudgeon - showing isn't that bad.  Nothing scary happened at all

No, nothing scary did happen at the shows. And thankfully, nothing scary happened driving TO the shows either, due to our careful efforts to learn to go in and out of the trailer in a safe and orderly fashion. And as you may recall, this trailering portion of the whole event was actually the part that freaked me out the most. "Practice makes Perfect" loading and unloading sessions are of course the most essential element to  easing one's worried mind with respect to trailering

However, as with everything else in the horse world, if practicing and perfecting are just not enough to ease your psycho neurotic mind... the horse world has an app for that.  As in - some expensive gizmo or piece of tack you can spend money on and app-ly to your horse, in hopes of protecting them from whatever it is your psycho neurotic horse owning mind is keeping you up at night worrying about. For me, it was the image of Ms. V kicking her spindly toothpick legs through various surfaces on the Red Rocket.  No matter how many times she stomped on and off the trailer during practice, I could not simulate what might happen once the ramp was shut and we were rolling down the road.

Now, those of you that know me, know that I am a zero effort horse owner.  I don't spend a lot on the frills. Hay. Water. Pellets. $9.99 plastic brush boots from Greenhawk. That's how I roll. I am the anti-tack whore. I am like the wizened and withered, lock-legged spinster of the tack buying world, or tack nun, or something like that.  But this once, way back when, because of these sleepless nights....I decided to break my own rules.  I decided to invest in the ultimate bubble wrap of horse transport - those big honking kevlar sausage shipping boots that come up to the horse's crotch, and make the same swoosh-swoosh-swoosh sound as a snowsuit as your horse parades awkwardly around the yard. 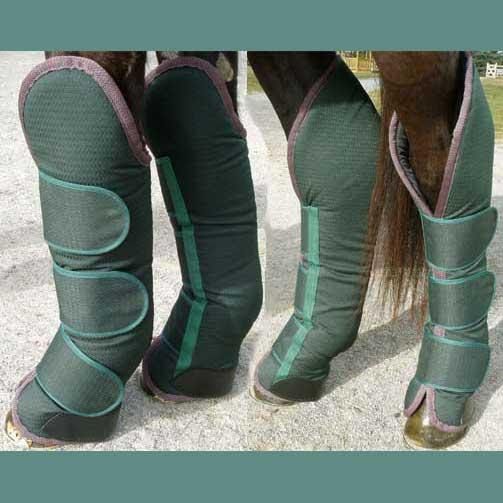 No slouchy old poo stained cottons and stretched out bandages for Ms. V.  Her legs would be encased in the equine equivalent of bullet proof vests, because I was a loving, caring, concerned horse owner.

Top all of this off with a dorky leather chapeau - and we were ready to hit the road in perfect safety.

No practice makes perfect session is complete unless you use all of the equipment during your practice.  And so, I got Ms. V suited up and prepared to take her off to the Red Rocket to try out our new ensemble.

She stood quietly in the crossties wearing her new duds as I wandered off whistling to get her leadshank.

There was rearing. flailing. flipping, falling. Eventually, there was the ripping of crosstie eyebolts out of walls, and finally, the ripping of $100 shipping boots off of legs, using some combination of walls and other legs.

And there was of course about 4 absolutely stunned and helpless bystanders wondering what the hell they could do to stop the insanity, yet also wanting to live to see another day without having their head kicked off by the freakshow going on before their eyes.  As luck would have it, we were all unfortunately behind her - so grabbing her head was not an option.  (Not that it would have helped much, I don't think, to be honest).


Finally, after what seemed like a really long time, but was probably only seconds, there was one shaking, snorting horse, staring intently at the tattered remnants of the leg-eating sausages, with a look on her face that clearly said..

"take that, you son's-a-bitches. Want another piece of me?"


Curmudgeon!  You almost killed your horse!  Don't you know you should always....(please insert your own favourite piece of know-it-all advice right here).

Yes, I did think of all of these things.  I ran them through my psycho-neurotic mind that night, as I laid now doubly sleepless in bed, worried not only about toothpick legs flying through the walls and windows of the Red Rocket, but about pieces of shipping boots flying out after them and bouncing off the windshields of passing cars.

Should the crossties have had pieces of twine attaching them to the walls, so they would have broken free easily?  Maybe.  But then we would have had an insane horse running loose through the aisles.

Should I have introduced the boots more slowly?  Maybe. But she had worn her poo stained cottons and stretched out old bandages several times without incidence, and wore her $9.99 Greenhawk brush boots every day.  Who knew these would push her over the edge?

Should I have just stuck to my old plan of being the tack spinster?  Yes. That was the only answer.  I was being punished by the aliens that run the simulation for swaying from my strategy to be the world's most cheap-ass, curmudgeonly horse owner.  One who did not spend a dime on stupid shit that horses don't really need.  Like big honking shipping boots. Or a $3000 saddle when there is nothing at all wrong with the $500 one.  Ooops, I am getting ahead of myself again here, aren't I.

(Oh - by the way - please feel free to tell a tale of a horse you know who's hock got popped off like a bottlecap, or who's knee was rubbed right off of its body due to the absence of big honking shipping boots, to prove me horribly wrong.  I love that).