Because it has been a while since the actual events described below occurred in real life, I decided to peruse the bulletin boards to bring back to mind the challenges I faced at the time, by reliving them through others.

(Peruse - this has been one of my favourite words, ever since I mis-spelled pursue on a resume, and instead of pursuing new opportunities, I had written that I was perusing them. I got the job, and was never questioned about my interesting choice of verbs. And, with the way my career has gone, it is now pretty clear that this was not an error, but was actually psychic foreshadowing).

Question to be answered: Was the process of learning canter-walk-canter transitions really all that painful? Is anyone else out there making the same non-existent progress that I was at the time?

You COTH*'ers were no help whatsoever. The bunch of you have really migrated towards the practical and factual. "Where to buy saddle x". "Has anyone tried bit Y". "Do I really have to buy the shadbelly that makes me look like Bib the Michelin man with my biggest roll sticking out in the middle". The closest I found to anything that might start a multi-page, classical versus competitive debate was..."How are your green beans" 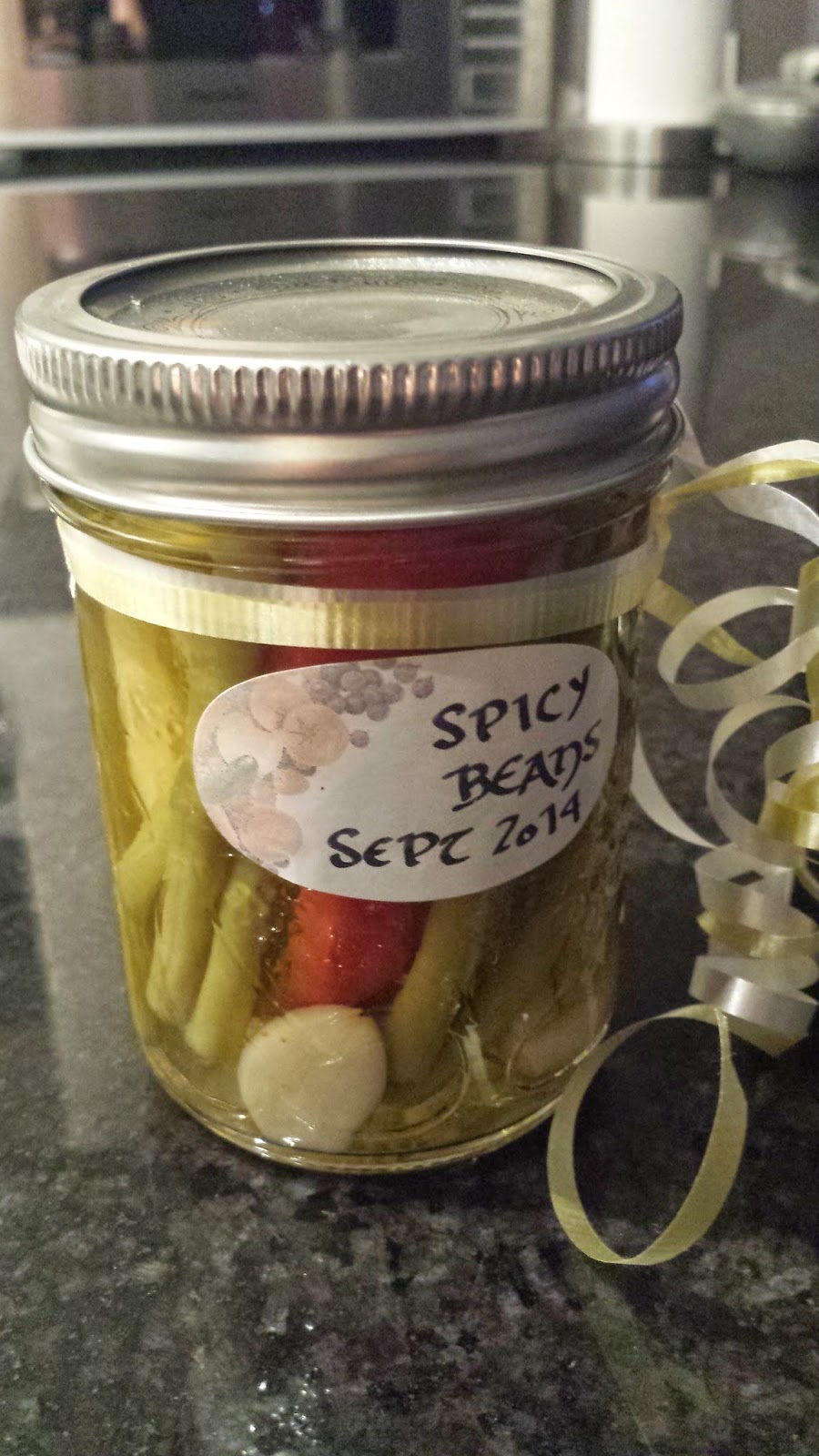 Why thanks for asking. Mine are totally delicious and ready for use in a Caesar. Or two. This is what happens when you sell your horse, folks. You find the time to coat things with vinegar and stuff them in jars, which then sit in your cupboard for years, and make your friends laugh nervously when you shove one in their drink and say "No, seriously. Your odds of getting botulism from my home preserves is really, sort of fairly low".

(Hey it is October - so here is a timely question. Which is more likely to kill you - Halloween apple with razor blade, or Fall harvest preserves made by your somewhat senile 90 year old neighbour. Hard call, isn't it).

So, I had to turn to Ultimate Dressage instead. I knew I could rely on them to shed some light here.

Wow. I have to admit I didn't make it past the first page. I felt my eyes rolling back in my head and had the urge to flirt with death by preparing and eating some low-acid fruit without a pressure canner to end the agony. My God. My pain has been relived. Mission accomplished.

And best of all, the totally incomprehensible descriptions of correct aids provided by the usual suspects on the ultimate board are being described in such a way that I presume the horse in question must already knows how to execute canter-walk-canter. Really, really freaking well, in fact, to decipher what the hell is going on as per UDBB*.

Which, as you may recall, I found a challenge about a year before this. And I had not really practiced since. And I was now trying to recreate this muddle of aids on a horse that had no clue what I wanted. (Welcome to my world, at least 80% of you have just muttered...)

But Curmudgeon - you had already shown training level by this point in time, and as I recall, got some halfway decent scores (intermingled with the nutty nutbar ones). How bad could your transitions have been? Did your preparatory steps up the pyramid not prepare you to develop great canter-walk-canter transitions seamlessly?

Build! Build on your pyramid, Curmudgeon!

Answer - No. No can do (or could do, seeing as this all happened in the past).

Oh sure, for Training level, my transitions were just fine.  Halts were generally good enough for a six, or maybe seven now and then. They were sometimes "a little unsteady", or "not quite straight", or suffered from "off contact after halt". The biggest challenge was usually "not immobile in halt" which I told myself is preferable to way too immobile. Or, preferable to total lack of mobility on centerline, ever, at any point during "X-halt-salute".

The sequence of trot - canter - trot is really not all that bad to execute either, especially with the level of precision expected at training level. It is essentially every canter transition a hunter person ever does, even though they insist they are cantering in and out of the walk.

And don't even get me started again on the transitions contained "within the gait".. a.k.a the stupid stretchy circle or nose dragger walk exercises. Seriously, I don't even consider these "transitions" in the true sense of the word at all, but almost more exercises in obedience. Or, deception. For me, they usually involved shortening the reins without Ms. V noticing what was going on, until they were where they needed to be for me to put my leg on and go from stretchy into working without any steps of jigging. It was kind of more like playing Operation, or Wacky Wire at the CNE than actually executing dressage... eaaaasy...eaaaaasy now Curmugeon... creep those fingers forward - genntttly...don't touch the sides...


As time went on and I got more strategic in my training, they became drills - walking around the arena was free walk - collected walk - trot - working walk - free walk - extended walk - free walk - ad nauseam, mixing things up so much that Ms. V really had no hope of predicting what was coming next, and therefore had to wait for my aids. If I were a classical person, I would call this "correct training", as the horse should always be obediently awaiting your aids.

Personally, I like to think of it as a kind of equine mindfuck. Whatever.

Sorry, where was I.

So forgetting about these party trick transitions - even the jump from Training to First level just adds some lengthening transitions within the gait - but  the backbone of the test with respect to the between gaits transitions is pretty much the same. Trot - halt - trot - canter - trot - walk...

And we were ready for all of that, heading into the spring of what would be our show season #2, and our First level debut. But progress doesn't stop just because show season is here does it? And besides, if you are showing First level, you should be training Third, since one always wants to be schooling at least two levels higher than they are showing, right?  You are all doing that, I assume. Perhaps dabbling in changes and half steps, and whatnot, while also preparing to wow an r judge at a schooling show at First on the weekends. Right?

(Ha ha, ha, haa... people make me laugh when they say this. Because it is an oh-so realistic generalization for the average adult amateur showing First. Not).

Quite seriously, in my freakishly optimistic mind which had "one level per year" drilled into it by reading bulletin boards, there was absolutely no reason to slow down for us. We were not about to just hang out in a leg-yielding, canter-trotting rut perfecting our stupid stretchy circle. We needed to push on, and begin introducing the next elements on down the road in our journey.

And the worst of these elements was...by far. No comparison.  No contest.

Canter. walk. canter. And boy, was it ugly.

In fact, I contend that this movement is really, beyond sitting trot, beyond trying to morph the leg yield into something more shoulder-inny - is the reason people have trouble making the jump from First to Second level. Doing this transition well is really not easy. Well it wasn't for me in any case, and based on my scribing experience, it isn't for others either.

What it all boils down to, in my "what the hell do you know" opinion is that the real difference between First and Second level - the screaming, can't be faked movement - is the simple change. And the reason is that it requires both a level of finesse on the rider's part, and ability to collect on the horse's part that most of us will never obtain.

And, if this first stage of collection is not obtained, instead of that leaf like flutter to the ground, you get a mixed bag of propping on front legs, hopping behind, and a whole lot of equine WTF middle finger as you try to jam on the brakes as the horse is merrily cantering around the arena, doing exactly what they have done and gotten rewarded for for the last two years, starting the confusion in their little walnut brain. Then reapply the gas sending the horse blasting forward, and yanking on their face unintentionally as they do and you fall behind the motion, thus completing the confusion in the little walnut brain.

It is also not what coach Ritenau was doing when I watched her ride either, as she seemed to make no more progress with the exercise than I did. Why not, you ask?  Was she doing a poor job of trying to install this button? Or was I just fucking up any traces of the button so seriously every time I rode that my efforts totally obliterated any small amount of progress she made in my absence?

Hmm, good question. I don't really remember, and to be honest, I was probably so ignorant of what should have been happening at that time that I would not have been able to spot the faults in any case.

The bottom line is that between the two of us, we set up the foundation for a horse that really, really hated canter-walk-canter transitions, and crashed down and blasted upwards if your aids were not perfect. Every time. Forever.


*COTH - Chronicle of the Horse
*UDBB - Ultimate Dressage Bulletin Board