Would you like to supersize your sweetfeed? How about a side of beetpulp with that hay...

Let's see, where to begin.

What was the first thing that was subpar about my horse.

I guess it would be - her body condition.  In the eyes of Dr. Lana, she was obviously much too thin. Which is, of course, why she felt the need to announce that she had the pelvis of a dairy cow.

Oh dear. This was not a good start. Little did Dr. Lana know that at the time, my entire life revolved around preaching the miraculous findings of something called "The Lifespan Study" to pet owners.  Nestle Purina had spent an insane amount of time and money proving that dogs fed 25% less food and maintained at a "lean body condition" lived longer than their pair matched littermates that were allowed to become chubby little labrador sausages, typical of what you might see in the neighbourhood dog park.

And so, as part of my glamorous career I went here, there, everywhere - to trade shows and vet tech colleges and pet store staff training events - showing people how to perform "the healthy hug", which was essentially a way of squeezing dogs to determine if they were at their "ideal body condition" and therefore likely to live "long, healthy lives".

Of course, over time the project was proven to be an abject failure.

The competition quickly twisted the results of Purina's findings into "Dogs live longer when they eat less Dog Chow", flushing any benefit of 14 years of careful data collection down the toilet. Yes, this was technically true based on the findings of the study, but totally irrelevant (since dogs live longer eating less of ANY food versus being allowed to become overweight).  However, the average pet owner doesn't get caught up in semantics, or the nuances of published research - they just want what is best for their dog.

Nice work, Purina - remember, no good deed goes unpunished.  Forget research. They would have been better off spending the gobs of money spent on this study on a lifetime supply of wild caught quail and fru-fru berries, because that is what really sells in the land of pet food.

"Surely this 18 year old at Pet Valu knows her shit, and yes, my chihuahua is very reminiscent of her timber wolf ancestors...sign me up for that $80 bag of elk and tapioca..."

Anyway, forgetting all of that (and trust me, I really do try to forget)... the most intriguing finding of "The Lifespan Study" to me, as a horse owner, was the fact that dogs fed to a "lean body condition" had significantly reduced incidence of osteoarthritis at the age of 8 years old

Now I know dogs aren't horses, and we can't always extrapolate across species, but to me, it seemed like a no brainer to give this a whirl - how could it possibly hurt?  Anything that kept my horse sounder, longer, sounded like a good deal to me. Worst that could happen was nothing, I figured, and I made a commitment early on to keep Ms. V lean in hopes of staving off joint disease.

And so, instead of pumping her full of groceries until she had a jiggling, rippling, dimpled meatball of an ass as is expected with the average hunter or dressage horse, I had instructed the farmer at Lilliput to feed her to a "moderate" body condition score.  I showed him a chart with a little picture, explained how I wanted to be able to feel her ribs, and did not want to see spongy gobs of fat on either side of her tailhead - and voila. He did exactly what I asked.

Actually, this is no easy feat when you are dealing with a horse in the process of growing a full hand between the ages of three and five, and thinking back, he did an exemplary job.

But Dr. Lana would have none of this.  Forget that study. She looks too thin. What would people think when they saw this bonerack in her stable?  This needed to be corrected, even if it meant she became a hobbling cripple somewhere down the road. 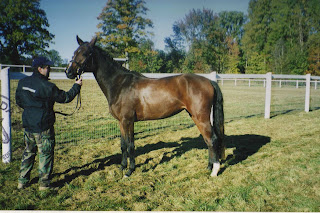 So which one of us was right?

Who knows. The research on the subject is really thin (pardon the pun), however the bottom line is that from a "literature review" point of view, when it comes to dressage horses as long as your horse isn't emaciated or exploding at the seams, anywhere from 4 - 7 on the Henneke body condition score chart is deemed to be "acceptable".

From a "catty dressage people whispering behind your back about what a lousy horse owner you are" point of view though, there is no doubt that thin takes the cake - a great number of horse owners are distressed by the notion that a horse has bones contained somewhere within its body - skeletons should apparently be hidden away in nice smooth layers of flab.

And so what if the flab erases half of a horse's athleticism - obesity has its benefits.  Freaking out and throwing your adult amateur rider to the ground is a lot of work when you have to haul a few extra hundred pounds around when you attempt to leap and buck. Why bother. For many riders, the sound of a plodding earthbound trot that causes the arena dirt to throb like a tuner car's subwoofer at a stoplight is the sound of safety.  As an added bonus, insulin resistance builds a nice cresty look so much faster than correct training alone.

So, I kind of see her point. Fat = happy in the mind of many riders, and since she was trying to drum up business for this new joint venture, housing skinny little horses was not in line with "good advertising"

But, as with many things relating to Dr. Lana over time, I actually don't think her intentions were all self motivated in a businesswoman kind of way. I really and truly do believe that she thought Ms. V looked too skinny - we just had different views on what constituted the look of "an athletic horse". Her heart was in the right place. It was just an entirely different place than mine. I think part of the problem was that I had been raised with thoroughbreds and loved the look of a tucked up lean horse, whereas Dr. Lana was more of a field hunter kind of woman herself - her eye had been trained to crave a horse with a meatier appearance.


Really, it is no different than with people - we all have our preferences when it comes to body type.  Apparently there are people out there in the world who think Gwyneth Paltrow actually looks good in a bikini. If I were a man, or switching teams, I would want to feed her a sandwich or two with a side of cupcakes so I wouldn't crush her if I rolled over in bed. But hey, she is apparently the "sexiest woman alive" so what do I know. And why does it matter. As long as she doesn't do anything stupid like feed her children bizarre elimination diets, who cares. 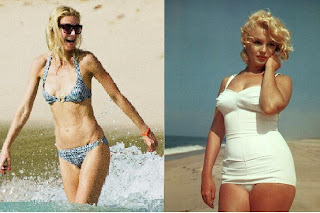 Annnyways, Ms. V was now residing in Dr. Lana's barn, and it made perfect sense to to her that we proceed to make Ms. V look exactly the way she wanted her to look, with no consideration whatsoever of my opinion on the matter. Logical, no?

And so began the ongoing battle of the bulge. Or lack thereof.