Damn you Scattails. Damn you.

Sorry, sorry, sorry... again.  I realize that I am one of the world's most delinquent bloggers.

But I have someone to blame it on this week.

It is all Scattail's fault.

Because Scattails is an entirely inanimate boat. With even less ability to mess up my schedule or to take control of my life or to lead to my failure to do anything than any horse. But whatever.  I am still blaming this all on Scattails. 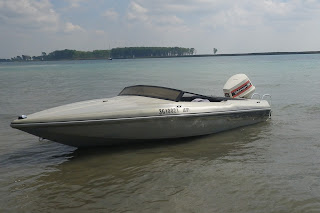 Although we are sometimes hard on ourselves when it comes to stupid choices we make with respect to our horses, we really should cut ourselves some slack. Whenever I feel down about my lack of success with horses, I pick myself up and think to myself "Curmudgeon, take heart. It is not all about horses.  You make stupid choices in other areas of your life as well".

Which brings us to the story of the seats of Scattails.

Now, since this is a dressage blog, I am going to tell this story using comparisons we can all understand, as horse people.

If Scattails were a horse - he would be an aged quarterhorse (nee 1982) who had been living in a thistle filled paddock of a friend for approximately 20 years. A friend who desperately wanted to clean up the thistles but needed to get the horse's hairy ass out of there before they could accomplish the feat. In the case of Scattails, the field was a shed, but you get the picture. Motard was approached by said friends, and asked if he would like to pay a paltry sum for the honour of owning the beast (and getting him the hell out of their shed).

Well who wouldn't.  With all of the glee of a $500 horse shopper on Craigslist, Motard brought home his prize, shovelled out the copious amounts of racoon and rodent turds and gave the whole thing a good hosing down. He then proceeded to happily bash around the reedy shallows of Rondeau Bay in his new found toy, sending up rooster tails of silty mud behind him and stopping periodically to rip handfuls of green slime covered stuff off of his entirely fouled prop.

Over time, Scattails has proven himself to be the equivalent of the perfect trail horse. He is sound and happy enough to let you drive around like Relic on the beachcombers, outrunning freighters on the St. Clair river and whatnot. Were he a horse, you would ride him confidently over hill, dale, through rivers, down busy highways, and live that dream of going through the Tim Horton's drive through on horseback that we all secretly have...Yet at the same time, he so economical that if - in the course of being a maniac - you were to break his leg or run off a cliff or some other calamity befell you, oh well.  Not much is lost. RIP.

But, being the fussy dressage rider that I am, this was not enough for me. Not nearly enough.

"Motard - look a that thing.  The fibreglass hull is all dull and oxidized - and the glitter paint doesn't glitter anymore.  You tore out all of the carpet to get rid of the wet racoon turd smell and now the floor looks like hell.  And worst of all - the very worst by far - although I do appreciate that you removed all of the rodent nests from the foam within the ripped seats - you patched the rips with duct tape.  Now when the sun shines on them, my legs get scorched by the smoking hot black vinyl while being held firmly in place by the melted glue on the edges of the tape, like some sort of ass flypaper".

This would not do.

"But Curmudgeon", said Motard. "Can't you just enjoy Scattails for what he is. A fun, cheap toy".

It was the equivalent of riding around on a shuffling quarterhorse.  I became obsessed with fixing Scattails, just as I become obsessed with improving the "way of going" of any horse that I sit on. When I was done with him, he would be moving freely forward in a clear and steady rhythm, accepting contact with the bit.  Or at the very least not grabbing my thigh fat with his sticky seats.

Motard kept me at bay for the summer, however once he was out of the water and safely tucked away in our garage for the winter, I began my makeover process.  I decided I would sew new seats for Scattails.

Curmudgeon, what the hell do you know about upholstering boat seats?

Well.. nothing. But that doesn't stop people from buying green horses now does it?  And it didn't stop me from beginning a project that I had no skill or knowledge whatsoever to execute either.  Pfft, piece of cake. I checked out a bulletin board or two on the subject, apparently other assholes manage to get this done. I make stuff using "Very Easy Vogue" patterns all of the time. Really, how hard can it be.

And so, with all of the blissful ignorance of a horse owner preparing their crusty old "just doesn't want to jump anymore" 16 year old hunter for their new career as a "dressage horse"  (hey, how hard can it be!), I tore the seats out of Scattails and began my re-schooling project.

No problem, Curmudgeon.  Stay calm. It is December - you have lots of time to figure this out.  Just go back to Len's Mill store and buy a few more bolts of vinyl fabric and start again... January...February...March...April...

I am sure you see where this is all going.  My time was up. I could only hide the evidence of my failure under the canvas tarp like a Boston terrorist for so long.  At some point Motard would be taking the boat back to Lake Erie, and he would expect someplace to sit besides a metal post with a few bolts sticking out of it.

I suppose my next step could have been to convince Motard that the perching on the metal post and bolt thing is actually the "classical" way to ride around in your boat, and that cushy foam filled seats are like razorblades in the hand of monkeys.  And that the resistance shown to me by the seats is actually an indicator of the cruelty of the artificial aid of the sewing machine.  However, since he is not a total idiot, sweeping the problem under the carpet as many a dressage rider chooses to do was really not an option.

And so, to make a very long story short - I have spent pretty much every spare moment of my time in the month of May desperately trying to finish these fucking boat seats.  Which has left not much time for the blog.

Damn you Scattails - you see?  It is all his fault.  I told you so.

Back to your regularly scheduled program soon.. I promise! 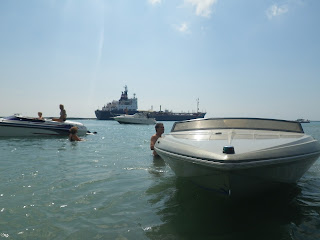