Dressage - you dare to be dull. That's why I loved you

Even Mrs. Curmudgeon has bitched to me now about my failure to keep up the posting pace here in February. It is winter! You should be holed up in your house complaining about dressage, Curmudgeon!

True, very true.  I do apologize. However, I have been out of town, again - this time, on a fabulous vacation to the horse show mecca, Wellington, Florida...

Yes, my time had finally come. Way back in December, I planned myself a nice little trip to sit proudly in the bleachers in West Palm (or on the rooty, lumpy grass at White Fences..wherever. Hey, not to be catty, but seriously, our Trillium shows have better rings). Yes, last week, I got to plunk my ass down somewhere warm and sunny, misty eyed, proudly watching...uh..well..errr... it ends up, proudly watching a random assortment of strangers. For no particular reason.

This is the horse world, my friends, and nothing ever seems to go according to plan, now does it. Long story short...I made it to Florida, Ms. V and her new "owners" did not. But airline tickets and other things related to fabulous vacations are not necessarily refundable, so I packed up my golf clubs and went anyways. And as a result, I am behind on my posts again.

I didn't limit myself to visiting only dressage related venues. No, I went to see some "H/J" stuff as well. And yes, a comparison of the two did bring back my love of dressage just a little tiny bit. As I walked around perusing the engraved spurs, to be strapped on to the snakeskin brown boots trimmed with alligator scrotum, to be worn with diamond studded breeches etc. at the golf cart choked carnival known as PBIEC (or, the Palm Beach International Equestrian Centre..if only the E were a U, it could be such a fun anagram..) I was reminded of one of the things that I really loved about dressage in the beginning...

It's utter simplicity when it comes to acceptable "in the ring" fashions.   White pants. Black coat. Good to go.

Sure, the whole helmet thing has added a bit of "wild renegade" to the costume, but for the most part, I could pull out the same old suit I bought back in 2004 and ride on into the ring without anyone blinking an eye.  Even my scuzzy old velvet helmet would be ok. Maybe I could paste on a rhinestone or two if I really wanted to be cutting edge.

I guess to be fair, I did get really good wear out of the grey pinstriped hunter jacket that the Curmudgeons bought me back in the early 80's. 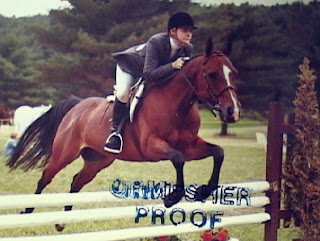 This same jacket went on to participate in scholarship and job interviews in the early '90's, as well as Trillium shows in the early '00's, and a variety of funerals all along the way. Hey, a good wool coat never dies. I think that my niece is still using it now, 30 years later.

So really, hunter clothes can be very versatile, if you don't mind people thinking that you look horribly dull, dowdy and outdated.  And if you don't mind smelling faintly of horse manure in job interviews. (Dry cleaners can only do so much. They aren't miracle workers, people!).

(Actually, the grey pinstriped jacket never truly went out of style.  Had I splurged on a brightly coloured dark pink or purple shirt to wear under that jacket back in 2002 when I last showed hunter, I would have been almost up to date in appearance. And, as an added bonus, I could have proudly sported big drippy dark sweat stains under my pits and down my back into my ass crack like all of the other cool hunter girls when jackets were excused. (Does anyone else remember this? Who on Earth thought this was a good look?) Mercifully, I was too cheap to update my jacket OR my shirt, and stuck with my traditional white, sweat camouflaging rat-catcher).

It was not only the simplicity of the required show garb that appealed to me with respect to dressage back in the day. The whole affair was just so bare bones as compared to lugging around poles and brush boxes and coops and whatnot - no "rigamarole", as Motard would say.

Even with winter ending and show season looming just around the corner - REAL show season this time -Training level, with cantering and everything - there were really only a few basic things I needed to do to prepare for the really big shoooows.

First - the Land of Liliput did not have an outdoor sand ring, but only a fenced in, rock hard grass area. However, it was flat, smooth, and large enough for a full dressage court - including the nice big area to circle around the outside, do a last little warm-up, and have your horse freak out and predetermine your submission score for you before your enter-ex-halt-salute as you would at a REAL show (well, a real show with the exception of White Fences, I learned this weekend, where you are expected to dodge trees and what not).

So, althought it was not perfect footing-wise, it was spatially superior to many dressage rings I would come across at fancier barns in later days.  Luckily, I was still new enough on the dressage scene to not realize that riding on grass was equivalent to wearing a purple troxel in the "things that truly cool dressage people would never do" department, and so I really never gave it a second thought.

(Actually, as time went by on my dressage journey, I would say I was more often faced with suspensory sucking deep sand footing at "professional" facilities - which we all know is a bad thing. In fact, work on hard ground is reported to strengthen bones and ligaments in growing horses.  I don't know if this is reported only by people on bulletin boards to justify riding on such footing in a way that sounds more classical than saying "I ride on rock hard, lumpy grass because I have no place else to ride" or whether it has actually been researched. Regardless - it wasn't on my "things to obsess about" radar.)

There were no dressage letters - and what I did obsess about a lot was the potential of showing up at a show and having Ms. V be terrified of potted plants and whatnot.  So, I put out the word at my new job chock full of crazy pet owners that I was looking for used cat litter pails (no, no - not the tray where the cat actually shits - the non-recyclable landfill-filler plastic pails the litter comes in), bought a roll of duct tape, and created a nice set of A-K-E-H-C-M-B-F flower pot thingys to put around the ring at appropriate places. A shovel of soil in each plus a geranium when the risk of frost was gone, and we had ourselves a pretty nice looking, regulation sized ring.

ENTER-EXS-HALT-SALUTE. We were ready to practice not only bits and pieces, but to do full run-throughs of our tests.

For Ms. V - there was really not much to do in the appearance department.  I banged her tail, and shaved off the fuzzy explosion at the top that she had rubbed ragged on the stall wall while in heat, and bought a few proper white saddle pads.  I also learned to do those big, blobby braids - actually, now that I think about it - forget the clothes.  These are very the BEST thing about dressage, you poor, poor, 40-braid hunter suckers. Twelve braids done with elastics - they alone are worth the switch to dressage.

We were good to go.

Our first show was just around the corner - beginning of May, 2005.