Airbrushing and the Art of Dressage.

Thanks for indulging me in one of my periodic rants. Now back to our regularly scheduled programming.

Kind of, anyway.  Because something very timely caught my eye over at Chronicle of the Horse (COTH) that brings to light another rant, or re-rant as I have already touched on this once.

But let's back up first.  Ms. V. Learning to drive standard.  Aids on / aids off.

I am not going to even begin to make excuses for the fact that Ms. V was way too reactive to the leg, to the point that every time you put leg on, she spurted forward / sideways / where ever.  This is not a normal problem that most people have, and it should have been addressed much earlier than it was.

However - having inconsistent contact at this stage of the game is actually pretty common.

I would say almost every young horse I know, ridden by a less than perfect rider (and even many of those ridden by riders who are perfect in their own minds), either has contact that is too light, too inconsistent, heavy as lead, too low, too BTV, not even on both reins... please add your favourite variation of this theme here.

Because young horses are learning.  i.e - they don't know how to do it right yet.

It is just not easy to get perfect, quiet, light yet solidly "through" contact developed in a young horse, which is just one of the reasons why it is so incredibly irritating to hear the armchair Ankys of the internet world critiquing people frame by frame on video for every dip or bobble in a horse's head carriage.

(Not to mention that they expect horses to be able to do it in a double AND a snaffle, while executing perfect everything lightly and in harmony, whatever the hell that means.  Of course).

No problem Curmudgeon... if we go to shows and compete against other horses that are also working on the same concepts, at the same level of training, we can see how we are doing by getting the judge's feedback.

Ah, great point.  Because all of the horses progressing up the levels will pretty likely be going through some personal phase of "taint right" with respect to contact.  One would expect that a judge will observe, comment, mark fairly, and send the riders of these horses don their way with great feedback regarding what they have seen before them.

After all, they have taken the L program, as described in Lauren Sprieser's recent blog post over at COTH.

Pretty is as Pretty Does - A Day at the L Program

Basically the gist of this post is this... Lauren Sprieser (who I don't know from a hole in the ground, I have no axe to grind with her in particular...but she is apparently a Young Rider superstar, now up and coming coach, training with big dogs, blah, blah, blah...good for her) decided to help out with an L program training session by bringing her hot young prospect to the course to show off the fact that a horse that looks pretty is not always working "correctly".

She knows it will be nerve-racking to be shot full of holes by learning judges, but does it for the good of the sport, to help them learn.

A-HA!  This sounds like it will be a good read, I thought to myself, and may be in line with exactly one of the points that I am trying to make in my blog - don't panic if things aren't perfect all along, just keep on progressing.  It is great that this woman is getting out there and showing them what that pupal stage looks like.

And so she does.  She writes about the fact that her horse's contact is less than perfect, that he sometimes goes behind the vertical, and that "an authoritative connection to the hand is hard" for her horse.  Oh, how my heart warmed.  She is human, her horse is equine... she is showing judges that this is how the real world of working with talented youngsters look.

I'm glad that the future judges of the world are on the lookout for these things...(blah blah blah)... It was a good pat on the back for not showing him yet, even though he's putting together pieces of the upper-level work and could certainly show third level with nice scores. I don't want nice scores - I want to be brilliant, which means the connection needs to be beyond reproach.

Yes, that is what we should do.  Even though we think our horses are heading for upper levels... we should hide them in the closet because they aren't perfect yet. Wouldn't want anyone to see THAT!

And, we should train judges to attack the faults of horses that aren't working perfectly at the mid levels, who have some inconsistencies in the contact or bobbles here and there - because they aren't "brilliant" yet. Even if the trainers working with these horses think they are exactly on the right course in the big picture of things.

WTF?  Way to go girl.  Big pat on the back.  How does this make any sense?

ARRRGGHH!  Why aren't we instead focused on helping people understand what is NORMAL?

I guess it comes back to the whole discussion on the purpose of showing.  Is it to:

B: Show off that a horse that is 3 years older than it should be in the given level, based on objective of getting to Grand Prix before it dies of old age, can prance on through the test blindfolded

To be fair to the L program - in this post, we don't get to hear what was actually said regarding how this horse would have been scored in an 3rd level test.  Was there a discussion regarding the fact that everything this horse does is totally normal for a progressing superstar?  Possibly.  Was there another 3rd level horse shown that was dead broke and bottomed out to show the difference between imperfect potential and perfect dead end of the road?  I can't tell from the blog post, but if not, something is terribly wrong with the training program.

If this horse really IS headed for upper levels, there must have been lots of things the instructors of the course could have picked out to show the students.  Kids...scrape away the "small stuff" on the surface - sometimes btv - sometimes unsteady in contact - and focus on whatever it is that this horse is displaying that leads Ms. Sprieser to believe that she is headed for Grand Prix.  Presumably some sign of this greatness to come must have been on display, along with the faults, and THAT is what judges need to see, and to understand, if showing and the feedback received at shows is REALLY going to help us at all.  Who cares about the blips along the way?

Otherwise showing doesn't give us feedback - it is just another airbrushed pageant of perfection. Why bother going at all? 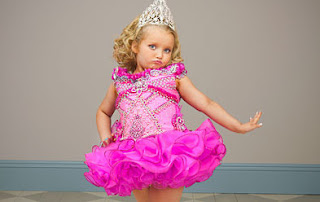 To be fair to Ms. Sprieser - I can't blame her for not wanting to show her imperfect horse.  Because who wants to work with an up and coming coach who's horse isn't scoring 70's at 3rd?  As we sit at our computers surfing centerlinescores.com , we can't see if a coach got 60% on their test because they scored 8-3-8-3-8-3  - pure brilliance interrupted by moments of nerdy young horse... or 6-6-5-6-5-6 boring end of line performance.

Better not risk it, Lauren. Hide that horse at home.

Posted by Stephanie at Saturday, November 24, 2012