Hey.. don't I know you from high school?

Way back in the day when I was 16 or so and thought I was cool, I needed some spending money to play the part.  And so, I passed my time on the weekends mucking stalls at a Thoroughbred farm.  (Acid washed jeans don't buy themselves, you know).


It was a fun enough job I suppose, and gave me valuable experience in dealing with maniac youngsters that would come in handy when I someday decided to buy my own (more on this to come!)

There were a few stakes winners that came and went, but for the most part as I recall the situation, the establishment was primarily a tax shelter for a rich restaurateur, and therefore the quality of the horses bred there was not of paramount importance.  As a result, there was a mixed bag of claiming race divas on site, now hairy and saggy and pumping out new claiming race type babies with the help of a few equally as saggy and hairy stallions.

Now some of the mares were nice enough visually I suppose - but none had been under saddle as anything other than racehorses, and even that was probably 5+ years ago in most cases at the time, circa 1986.  They were all far from racing fit by the time I knew them, and so I guess we could say they were "built like warmbloods" (i.e. - fat).  Actually, back in the day we didn't even know what a warmblood was yet.  Any horse with a nice topline and round bum was "fancy", and any horse over 16 hh was "huge" - some of these ladies qualified.  Now and then, while scoopin the poop and shooting the shit, we would play "which horse would you turn into your hunter" as teenagers like to do, but never expected anything to ever come of this.

I have to stop thinking this, don't I.  Because nothing is ever a dead end in the horse world.

While shopping, I looked at a horse sired by a Canadian Sporthorse by the name of "Dancing Eudardo*".  Not my favourite name of all time, sounds like a good name for a stripper at the Foxxes Den, but whatever...he is  a WARMBLOOD, right?  And that is why the breeder is asking $10,000+ for the offspring, makes sense, I guess.

The resulting filly that I went to see was just ok.  As were most of the "TB x warmblood" Canadian Sporthorses that I ended up looking at.  Nice looking, but just not WOW.  She was similar to 50 other horses that you would see at any average trillium show.  It was confusing to me, frankly.  What is the deal with these fabulous new "warmbloods"?  I am not feeling it.

When I got home, I started doing some stalking to find out more about the sire...allbreedpedigreequery is a wonderful thing. Hmmm... let's see... his mom was actually a Thoroughbred,  not a "warmblood", named Dancing Lois*..ok, that makes the stripper name theme a bit more logical if nothing else...

Whaaa...WTF? Just a minute here..Lois!  Dancing Lois!  I know that horse!  She was one of the saggy claiming race divas!  How could that be?

I was just like Fox Mulder.  (Not Scully.  I can't run in heels that well).  I had discovered the truth - it was out there.  I started searching the names of all of the Saggies.  Dish of Pepper - yep, she was bred to Goldshaleger to create "Ghostrunner*", another "Canadian Sporthorse" Stallion. 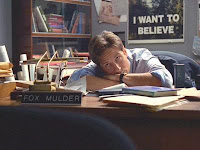 Her offspring, Love in My Butt* who was still racing during my time there - yep, she had a "warmblood" baby out there who strangely enough was one of the first so-called "Hanoverians" I had run into during my travels in the H/J circles - a big solid horse with a totally unbeatable temperament, but that was dog ugly and nothing special in the movement department either... well, now I know why she didn't dazzle me as I expected to be dazzled by a "warmblood".

This was at least a little less disturbing - in this instance Love in My Butt was only the mare, creating a few offspring.  But why, why, why on Earth were the genetics of the other saggies being passed on to multiple mares via Stallions with absolutely no performance records associated with any of them?

For the record - neither of these stallions are currently approved for breeding with CSH - I am not sure if they ever were.  But people keep breeding them anyways!  I found a Holst/TB/Perch cross sired by one of these stallions advertised as a "CSH" just now, for $2000 (you guessed it...a PMU baby).

I guess this false marketing isn't CSH's fault, but it sure doesn't help their cause any.

Had I not been an early adopter of the compulsive internet stalking habit, I would have never figured it out.  I potentially would have bought  the offspring at a premium as a "Canadian Sport Horse", sired by a "warmblood" (Not aged, off the track saggy mare spawn).  If I had wanted a TB, I would have rescued one...not that there is anything wrong with that...

And...if I can be a bit harsh - are the CSHA's standards high enough in the first place?  The mares - who at the time of their approvals must have been around 15 and 20 years of age - were not stunning specimens and had absolutely nothing to show in terms of performance, or even being ridden as something other than racehorses 10+ years ago, then wandering around a field for the remainder of their existence.  Should they have been approved at all?  Is that the best we have to offer with respect to foundation genetics here in Canada - big old TB's with the ability to cough up another baby?

I am not sure what the best way for them to clean up their act and image is... but it certainly does need some work.

And by the way - in case you think I have some bizarre axe to grind with respect to CSH's - really, I don't.  I did end up buying one, because a good horse is a good horse, whatever you might decide to call it.  She is NOT a TB cross though...

(why does Dressage Curmudgeon hate TB's so much, you may wonder.  Really I don't...)

*names have been changed to protect the saggy.

Posted by Stephanie at Thursday, December 22, 2011