It may only be one moment in time, but I see two chins...

Curmudgeon, are you seriously never going to show again? That's nuts! It sounds like the worst that happened to you at training level was a few scores in the 50's and some uninspiring judge's comments!

True, and really that is the worst that EVER happened to me, all the way along.  Repeatedly. I never fell off in the mud, or got eliminated, or jumped out of the ring... never missed a ride time or got chastised by a judge for anything other than wearing shorts while scribing.

So, what was it then, that sealed my fate and turned me into "person who never wants to show again..."

Well - it was the time. The money. The hassle.

Also just the fact that I had reached my goal (showing PSG) and I am certain had I continued honing my skills for the next few years, spending money, putting up with the wide world of dressage, I could have brought my mighty 55%'s up to maybe a 63% or 65%... but seriously, what is the fun of that?  A goal is only really a goal if you have some doubts about your ability to actually reach it.

It is kind of like getting to the end of your favourite video game.  For normal people, this means it is time to move on to a new game - spending hours going through the entire process again and again kind of just makes you a self flagellating nerd to everyone you know, except about 5 other similarly nerd minded people. No one I know except for dressage nutbars would even understand why I would be happier to get 55% than 65%, since to people used to the normal world of percentages where 100% is the goal still think 65% sounds pretty fricking shitty.

But there were other, more subtle things that influenced my decision.

For example, I never, ever have to ride a horse in the rain when I don't want to ever again. I will never have to do any type of braids, blobby or otherwise. I will very rarely ever be put in a situation where I have to poo in a port-o-let. And perhaps most importantly of all, I will never be faced with the horror of seeing my white and pasty, puffing, double chinned face captured in 187 frames of online Actionpix photos.  Ever again.

But Curmudgeon!  I LOVE seeing gorgeous pictures of my horse taken at shows when he is all dolled up!

Oh, don't we all. I love seeing the pics of Ms. V too. But the problem is these photos are always kind of like when you are stuck beside the willowy 5'10" office babe in all of your short and dumpy glory in the departmental photos.  Her beauty only enhances your... lack thereof.

Ms. V always looks beautiful in photos.  Me... not so much.

For example - who wouldn't want to see this beauty hanging on their wall...ridden by...errr... 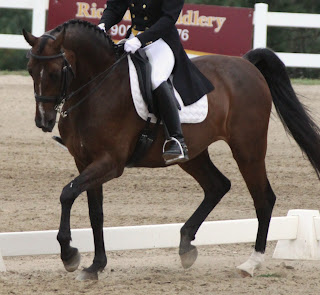 Some sort of sad looking elf...or is it the eighth dwarf, Druggy?  Seriously, I look bad enough in the morning, do I really need to see this droopy face staring at me while I drink my coffee?  Or really, at any time? 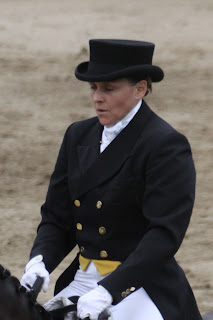 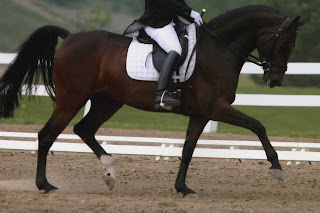 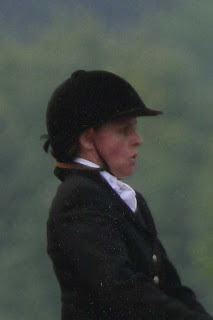 Now, there are some photographers that do try to help, bless them.  I actually bought this picture, and have it on the mantle at Motards Man Cave... 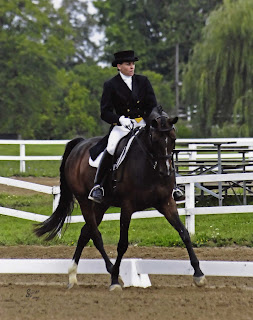 Which on closer inspection reveals the kind of hard-core photoshopping that you probably thought they only used to remove all of the rolls and pimples and tattoos from Victoria Secret models.  Unfortunately airbrushes can only do so much, and they can't stop a severe shoulder tilt to the left, but the artist did give it a valiant effort. I especially like the nice shimmery lipgloss that I wasn't actually wearing in real life.

Now, I realize that I am not the most photogenic person in the world. I have come to accept the fact that, like my distant relative Alfred E, I have non-symmetrical features and a squinty left eye, which according to Psychology Today, may be an early warning sign of the lunatic within. 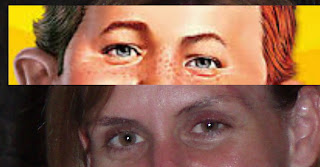 With time, I have also come to understand why it is that the Curmudgeonly parental units refused to buy my grade 13 graduation pictures.

However, I just really do not think I am as horrifyingly ... horrifying as I come off in my dressage show photos.

I started to develop quite a complex about this whole affair. For the longest time, I actually had a picture on my desk at work where I had cropped my head off.  (I told people it was supposed to look artsy, but I think it just came off as weird). And it affected me to the point that, before entering the ring for my very last PSG test ever.. the cherry on the sundae, the last hurrah, whatever you want to call it...

I did not think of "getting horse more thru over topline" or "riding more precise figures or movements" or "allowing horse more freedom to move up and out..." or any of the other suggestions that the judges had given me in my collectives over the years.

My entire thought process was focused on one thing.  Get out of that fucking ring with at least one picture to hang on your wall where you do not appear to have a double chin.

Done and done. Let's call it a wrap. 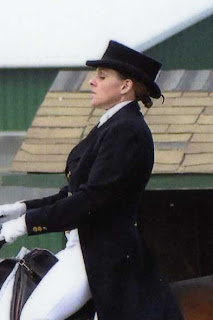