Oh, sorry. I lied. That was totally a rant, wasn't it. But seriously, it goes perfect with the next chapter of the story.

Yes, the time had come.  After about six months of walk, trot, occasional canter - circles here there everywhere and herky jerky transitions - we were READY!  We signed up for our very first Bronze show - Intro A and B.

For those of you not in Canada, Bronze shows are the lowest on the totem pole of shows, and really, this makes them the most fun of all to attend.

Anyone can go to a Bronze show and feel welcome.  Purple Troxel - sure. Half-chaps - yes. Is your horse a Georgian Gypsy Commercial Vanteca?  You will fit right in.

Is your horse not only in front of the vertical, but also often in front of the horizontal?  Are you tempted to do your training level freestyle to a song by Sir Mix-A-Lot, in honour of your horses scrambling gaits and/or butt size?  Great.  Come on down.

There are usually happy little prize baskets with carrots and horse shampoo and a lead shank, maybe a saddle pad, and generic ribbons with no year printed on them so they can be used indefinitely.  And of course, at least one or two self important, busybody volunteers who are treating it all like the World Cup has come to Puslinch.

But really their true appeal lies in the fact that you don't need multiple expensive memberships to enter, and the actual entry fees are reasonable.  Yep, they are dirt cheap, in the grand scheme of all things relating to dressage and horses.

And - surprise, surprise!  You tend to get what you pay for in this world, and bronze shows are no exception.  When I arrived on site at some ungodly hour of the morning with Ms. V, The Swiffer, and my mighty entourage in tow, the first alarming fact was that the "Longeing Area" was a slippery square of sloping grass in the parking area, still wet with dew.  Kind of more of a "Legbreaker Area" than a "Longeing Area".  Who's leg? Dealer's choice.

Tip #1 for those of you who always longe your horses before riding - stop doing that if you plan to go to small shows with limited facilities. You need to be able to get on your 3 year old right out of the trailer, when she is high as a kite... first thing in the morning, when she hasn't been turned out yet, at all, and is incredibly confused as to where she is and why.

Instead of longeing - maybe start a training program that involves leaving your horse inside for the day so she is slightly off kilter and nutso when you arrive. Then ask someone to come with you and ride around in the ring on a bicycle, or with a screaming kid in a stroller holding balloons...something, anything totally weird and distracting.  Mix it up. Lastly, drink four RedBulls before you start riding, so you are jittery and distracted and forget everything that you usually might do during a nice normal ride. If you plan to show, practicing under these conditions will help you to prepare more than longeing before you ride on a daily basis.

The next problem was, of course - the warm-up.  Because during my lessons and most of my in-between rides at Liliput, I either rode entirely alone or with other boarders who were incredibly courteous and stayed out of our way if anything went amiss.  Oh, having issues with your young one?  I will just stay down this end of the arena.

Tip #2 - these people are not at the show.  Instead, the warm-up is an entire herd of people with things going amiss, who all need to stay out of each other's way while trying not to die themselves.

I was no stranger to the show ring, but my last experiences a few years prior to this were at mid-level (Trillium) hunter jumper shows.  The warm up rings there are so refreshingly simple as compared to dressage shows.  Any dressage shows, really, not just the lower level ones.  Everyone just goes around the on-the-rail speedway, left to left... when one decides to jump a fence, they yell out their intentions in the de rigeur whiny sounding hunter voice "heads up owwwt-syyyde..." or "heads up axxx-sserrr" or whatever - and everyone knows what the hell is going on.

Not so in the Bronze dressage show warm-up, where 10 adult women on the edge of having nervous diarrhea are all somehow trying to pack 20 metre circles into a tiny sand ring, without crashing into each other, while staring intently at their horse's necks.  Accompanied by 10 or so pony club kids, who are darting here and there fearlessly with no regard for traffic regulations of any sort.

Right up to the end of my showing career, I never ceased to be amazed by people who would cut you off in the warm-up as though they had no concept of where you could possibly be heading.  Even at the Gold shows. Here is a tip - dressage is just not all that mysterious.  If you see a horse doing a medium trot, just about anywhere... assume they will continue going in a straight line.  Half pass - probably going to head on over doing a diagonal type line.  If someone has been on a 20 m circle for 5 minutes - they are probably going to stay there.

Sure, there is the off chance they will suddenly whirl around and head off in some totally unexpected direction, but play the odds and figure they won't - don't suddenly do some asshole maneouver right in front of them just because the voice of God (or your coach) is being piped directly into you headphones and told you so.

Anyway... once she got over her initial shock and awe at the fact that other people had the nerve to show up ride in her private little space and she settled into a groove - things actually went very well.  The ring at this particular venue is tucked into the "U" shape formed between the two barns and arena, so it is very quiet and private, and when we headed into the ring, Ms. V sighed a huge sigh of relief (ahh, those assholes are gone!) and went to work.

The result?  Sevens for our trot circle and free walk.  Sixes everywhere else except our centreline / halts - fives. 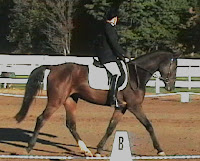 Comment in just about every square, the reason we got sixes instead of sevens (the scribe should really have come up with a shorthand) - unsteady in contact.  For a three year old in Intro A. I guess I have to tell myself, what else do they possibly have to say?  There just isn't that much going on.

And so, with the Intro classes over - I knew at that time the most important part of the day was not the actual showing, but getting Ms. V out and about and seeing the sights to make being off property less frightening and mysterious. I brought along a sidekick who then walked her all over the grounds exposing her to this and that, while I took The Swiffer in the Training level classes.

We won both handily, with glowing comments and scores in the high 60's.

In retrospect, this experience pretty much sums up dressage shows, judging, and moving up the levels.  Talented young horse showing in an age appropriate class, with age appropriate issues - not likely to win or score high.  Topped out at training level senior citizen going through the motions for the 98th time in his life without batting an eye...smokes the pack.

Your scores at the lower levels tell you NOTHING about the likelihood of your horse to progress in dressage.  Although this was so long ago that the results are no longer online so I can't be sure, I would hazard to guess with some confidence that Ms. V was the only horse in the 2004 Intro A/B division that went on to school Grand Prix. No, not because she was the only talented three year old in the county, but because I was the only owner stupid enough to bother showing Intro A/B at a bronze show.

It is hard to be objective when you arms are bundled with carrots and leadshanks and shampoo, and you are basking in the glory of kicking the ass of other sweating middle aged women on their sweating middle aged horses, but really, that should have been it for me and showing.  Even at this rinky-dink show, with the troxels and halfchaps, the concept was very clearly laid out for me. I should have said "AHA! This is a stupid racket!  No wonder the big dogs don't bother fritzing around at training level!  See you guys at PSG!".  But I didn't.

And hey - what would I have spent those thousands of dollars and lost weekends on, anyways?